The History of Immaculate Heart of Mary Parish

The History of  Immaculate Heart of Mary Parish

The parish of the Immaculate Heart of Mary was created when St. Mary’s church was built in Enniskerry Village in 1859. The parish includes the areas of Enniskerry, Kilmacanogue and all the Glencree Valley up to Glencree Village. This was formerly within the Parish of Bray.

Enniskerry Parish has four Churches and three cemeteries as follows:- 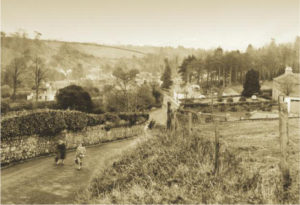 St. Mary’s Church is of the Gothic revival style and was built in 1859 by Fr. Thomas O’Dwyer on a site provided by Lord Powerscourt. Prior to this date there was no Church in Enniskerry and Mass was celebrated in a barn that was made available by Mrs. Dixon. The barn was just outside the village and was known as “Dixon’s Barn”. When this Church was built the Parish of “The Immaculate Heart of Mary” was constituted and Fr. O’Dwyer was the first Parish Priest. Up to that time he was the local Curate within the Parish of Bray. The Church has a seating capacity of 280 people.

St. Mochonog’s Church in Kilmacanogue Village is of the Romanesque style and was built in 1824. It replaced a previous Church on this site and is the oldest Church in use in the Parish. The Church is on an elevated area overlooking the village of Kilmacanogue and it is overlooked by the Sugar Loaf Mountain. The former Church on this site was the Parish Church of the former Parish of “Kilmacanogue and Bray” until the Parish of Bray was constituted sometime in the 18th century. Kilmacanogue Cemetery lies to the west of St. Mochonog’s Church. The church has a seating capacity of 200 people.

St. Patrick’s Church in Curtlestown is of the Gothic revival style and was built in 1891. It replaced a previous Church that was built in 1824. A Church also existed there prior to that date. Up to the beginning of the 19th century the local Curate resided in the Priest’s House at the rear of the Church. This included the house, a stable for this horse and some outbuildings. Adjacent to the Church is St. Columcille’s Cemetery. It is situated on a south-facing slope on the side of the hill. It overlooks the Church and has a panoramic view from Bray Head to the Glencree Valley. The cemetery was opened in 1866 by Cardinal Archbishop Paul Cullen, Archbiship of Dublin. Curtlestown Cemetery is on a site that was donated by Lord Powerscourt. Prior to the cemetery in Curtlestown the local burial place was Churchtown Cemetery which is in the Powerscourt Demesne. The church has a seating capacity of 120 people.