Sunday Message is focused on giving a practical application to the Sunday Gospel.

Each week, an original exposition of the Gospel is provided, along with a short reflection encouraging the reader to relate it to their life; learning points, suggestions for action and original prayer material are also included.

The full text of the readings at Mass are provided, along with the antiphons, the Gloria, Creed, Gospel Acclamation and Psalm. 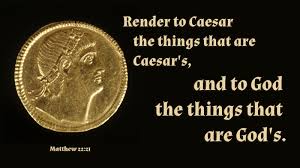 Jesus’ quarrels with the religious authorities continue, this time
involving the Pharisees and the Herodians, supporters of the
puppet rulers of the Romans.

They put Jesus on the spot with a question about paying what was basically a poll tax.
Jesus cannot give a straight answer without seriously offending someone: ‘Yes’ will get
him into trouble with his fellow-countrymen of strong nationalist feelings; the Roman
administrators are certain to take a dim view if he replies ‘No’. Jesus knows that their
challenge is motivated by malice, and he calls them “hypocrites”. He points out that the
coin by which the tax must be paid belongs to Caesar anyway, so it ought to be returned
to its owner: this allows him to avoid offending the Romans without (necessarily) falling
foul of the Palestinian zealots. He then changes the tone by reminding his audience of
their duties towards God, thereby bringing the confrontation to an end. His opponents
realise that Jesus has outwitted them and leave the scene.

Discussions often take place about
the relationship which should exist
between the bodies we usually call
Church and State, and this text is pressed
into service to separate the two. Thus,
people can argue the Church should keep
out of politics, that it should confine its
activities to spiritual matters and leave
politicians to run the country.

When we consider those situations
where the Church has, effectively,
become part of the government, or
at least a close collaborator, we could
conclude that there is something to be
said for this argument. The history of
the 20th century testifies to the Church
being allied to repressive dictatorships
and suffering from a lack of credibility as
a result. But while the ‘official Church’
may have been in large part involved in
this way, there were bishops, priests and
religious who saw that Gospel values,
the teaching of Jesus, compelled them to
become involved in what were political
issues. Liberation theology arose, based
on the Book of Exodus, which presents
a God who abhors slavery of any kind;
and on the prophets, whose target was
the political and spiritual leaders of
the nation, for failing in their duty and
responsibilities.

A church which confines itself to
‘spiritual’ matters soon becomes a
church of the sacristy, largely irrelevant
to the wider community. The mission of
Jesus’ disciples is to preach the Gospel,
which involves promoting human
values such as dignity, respect, proper
wages and so on. How this is done is
another matter: we find Christians in
every political movement, with different
opinions on how these principles should
be established, and attempts to found
explicitly Christian parties have run into
all sorts of human problems. Perhaps
the parable of the leaven in the dough
is appropriate in this context, where
Christians, motivated by the teachings
of Jesus, involve themselves in the life
of their local and national community
and thus, simultaneously, “give back to
Caesar what belongs to Caesar – and to
God what belongs to God”.

I can make a difference.

What pressing issues are there in your local
or national community? Find a way to help
to resolve them.

The Herodians were supporters of the
puppet rulers of the Romans, the house of
Herod.

The Herodian kings were not of the line of
King David, and therefore not regarded with
any great respect by the local population.

The poll (census) tax had to be paid in a
Roman coin which bore the image of the
emperor: this was a further insult to Jewish
sensibilities.